Today marks five years that I have been medication free, since June of 2013.  That’s about half as long as I was sick.  My life has continued to improve, and I am looking forward to the next five years and beyond!

The reason that I consider being medication-free healed is because mental illness is an illness of lack of functioning.  Being able to function without medication to me means that I am free from the illness.  (Note:  I measure the time that I have been healing from when I stopped taking medication, because that was very important to me, and I felt terrible on meds.  I do not mean to imply that that is the only measure of healing.  If another person is on medication and functioning and moving forward and living a good life, then I would consider that healing as well.)

Though the past five years has been a bit bumpy, and I have had some symptoms and had a minor relapse in the summer of 2016, it did not require me to be hospitalized or go back on medication.  Since then, my health has still been improving, and I am happier and more fulfilled in my life than I have ever been.

Below are some before, during, and after pictures (the first two were in my book Healing Schizoaffective, available here, in black-and-white).  It’s been a long road, and a steep climb, but it has been more than worth it.

p.s. you may want to read my book Healing Schizoaffective, available here, for a general overview.  It includes my story up until I discovered the Medical Medium, but there were many steps and transitions along the way.  Like the saying goes, “the path to enlightenment is like a bird flying; it leaves no footprints”.  I have tried to include as much helpful information on this website as possible, but everyone’s journey is unique.  However, I believe that each of us is uniquely suited to our own journey.  In other words, just know that you have what it takes, and where you fall short God is carrying you (even if it doesn’t seem like it).  Be well!!!

LEFT: this is me in December of 2003 the day before my first inpatient hospitalization and diagnosis of schizoaffective disorder. I look pale and gaunt and am obviously distressed. 😥 While I’m doing my best to hold it together, you don’t want to know what I was experiencing (think Stanley Kubrick film). Despite it being called a “mental illness”, I was still experiencing many physical symptoms such as severe fatigue, weakness, weight-loss, aches and pains, attention problems, neurological sensitivity, insomnia, and more.

MIDDLE: this is me in November of 2014 after a ten year battle with the illness. I started homeopathy in January of 2013 and was able to discontinue taking medication in June of 2013. The homeopathy allowed me to stay balanced enough and function without medication. However, I still struggled with fatigue and physical pain, and you can see that my eyes look dark and dull and my face looks puffy.

RIGHT: this is me in September of 2017 about two and a half years after being on the #medicalmedium protocol, such as removing dairy, eggs, gluten, corn, soy, and canola from my diet, juicing celery every morning, taking the heavy metal detox smoothie (wild blueberries, #vimergy barleygrass juice powder and spirulina, Atlantic dulse, and fresh cilantro) regularly, and taking some of the main supplements such as liquid B12, Vitamin C, etc. I feel like this protocol really worked at healing the root cause of my illness (a viral condition with high levels of toxic heavy metals – I also believe that other factors such as trauma played a role). You can see that my eyes look clear and bright and my skin looks fabulous (if I do say so myself 😄). Moreover, I feel healthier and happier than I ever have in my whole life!!! ❤️

Healing from Mental Illness is possible!!! I know, because I did it. I have fully healed from schizoaffective disorder after a ten-year long battle, and have been medication-free and living a normal life since June of 2013. If you or a loved one is struggling with schizoaffective disorder, schizophrenia, bipolar, depression, anxiety, or any other mental illness, there is hope!!! I am producing this podcast to accompany my new book, Healing Schizoaffective, to share the insights and wisdom that I gained from my experience, to help others who are suffering.

Please note:  As an Amazon Associate I earn from qualifying purchases. 100% of all revenue from this site (including royalties from my books) is given to charity.

Check Out My Books: 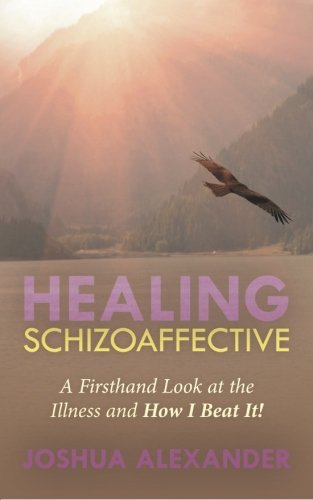 DISCLAIMER: I am not a licensed healthcare practitioner. The information on this website is being shared from personal experience, and is not meant to be taken as a substitute for professional advice. As an Amazon Associate I earn from qualifying purchases. 100% of all revenue from this site (including royalties from my books) is given to charity.